IMWorld 2018: The marketing strategy behind that epic split Van Damme did between two moving Volvo Trucks 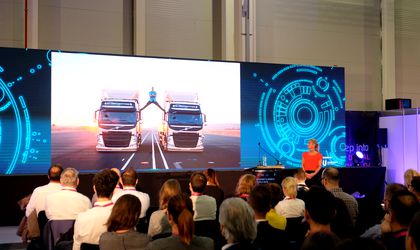 How does a truck company – albeit a market leader in many countries such as Volvo Trucks – manage to get close to 90 million views for one of its commercials? Its success, recorded on a video platform where countless content creators, most notably artists, vie for the attention of the world, must have puzzled everyone, not least other truck makers. So what’s the secret? Ingela Nordenhav, Director of Digital Marketing at Volvo Trucks used her presentation during the first day of  the IMWorld conference in Bucharest to reveal the winning strategy behind it.

“When people think about trucks, they typically think about big, massive things that sometimes disturb the flow of traffic and are usually kind of dirty as well. And you won’t wake up next morning thinking ‘hey, I really want to buy a truck,’ Ingela Nordenhav told the marketing experts attending her presentation. “Let’s face it, people are not crazy about trucks,” she shrugged. Yet, according to the figures measuring the impact of Volvo Trucks’ campaign on YouTube, they are very popular with people representing a wide demographic. A staggering 88 million views for their viral ad featuring  Van Damme doing the ‘epic split’ point to the fact that, if the average YouTube isn’t not into buying a truck, they certainly are buying into something else the company is saying.

Based in Gothenburg, Sweden, Volvo Trucks has been operating for 90 years and is now present in over 140 markets. In 2011, they were at the cusp of launching a new product; a truck the company believed was an innovative product. “Trucks are big, expensive products with long development stages. And we had developed the truck thinking it was a really innovative. The marketing around it had to reflect that”, Nordenhav explained. “And that is when we realised we needed to do marketing in a total new way, different from how we did it before.” For Volvo Trucks that meant taking advertising online. A very valuable insight her team used in the process of moving communication to the online space was that truck drivers are a community that is generally very well connected. “We typically met customers in the physical environment where the customer comes to buy a truck, or to the workshop to fix a spare part. We have catalogues to show them there. But something we are very aware of is that truck drivers actually live in their trucks, spending days and nights there. They have a certain time they can drive for, and when that is over, they are in a parking lot somewhere and what they do is to go online,” she said.

“They are a connected community, that exchanges information, about bars and restaurants and have chat rooms. So it is not just our company that is communicating, but also our customers and drivers. So we must be there and listen,” she added. “We still have customers that are not connected but also those who want to do business in their bed at midnight on their iPad, that is why we have started to meet our client in the digital space as well,” she said. 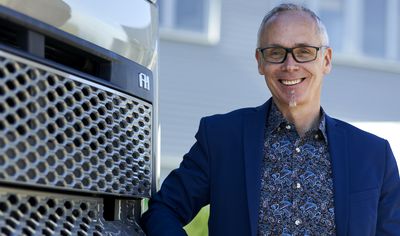 High on relevance, big on entertainment

But the brand’s clients are clearly not the only ones watching those YouTube ads. According to Nordenhav, at the core of the growth of the brand’s online popularity stands the decision to build the brand in a global way, not focusing on their customers only. “We decided to make it 100 percent relevant for the core target group and entertaining and interesting for a wider target group,” she explained. The marketing strategy was based, therefore, on the belief that the message should not stress the technical benefits of a product, but talk about the way in which people tend to see the products.

In implementing what she called the switch “from product to purpose,” the teams decided  to “always use a feature,” she explained, adding that “there isn’t a customer that will buy a truck only on that. But… if you’re in Canada and its’ winter and you are carrying timber and get stuck you’re going to need to be towed. And if you have a good hook you will be able to be towed without unloading and that makes a difference,” she said. The rule, she explained is to “always use a topic of feature extremely relevant for the core target group.” However, as Nordenhav pointed out, the right combination is a mix between aiming for the core group and making it interesting for the rest.

According to Nordenhav, the success of such a strategy came for Volvo Trucks from the profound knowledge of their business. “During the journey from awareness to loyalty you need to know where you want to be connected,” she said. “You need to be very well in tune with the business plan of the company,” she explained, adding that “if you are a start-up for instance, you will foxus on attracting. But if you have a customer base and compete for new clients they will come from the competition, like in the case of Volvo Trucks. Then, you should not focus on awareness.”

Another key point in the strategy is to tailor the content to the channels and aim for a high engagement on all channels, she said.

Currently, Ford Trucks’ Volvo Trucks – The Epic Split feat. Van Damme (Live Test), published in November 2013, has 89,657,902 views and has spurred countless spoof videos and parodies that have enhanced its profile, making it a part of popular culture. Looking back at the time it was launched, Nordenhav said that what changed was the tighter connection between marketing and sales.”In 2012 we measured success by the number of views we had on YouTube. Today we would measure it in terms of conversion,” she concluded.