Sophia Loren: “I would play in a Romanian movie” 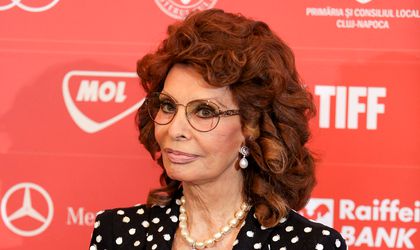 One of the goddesses of cinema, Sophia Loren, met the Romanian press gathered at TIFF for 30 minutes sharp to find out more about what’s behind a lifetime film career.

She walks slowly and she is absolutely amazing. She looks exactly like in any picture you have recently seen. She switches from English to Italian and back to English and she looks like she really enjoys the press conference.

“I would prefer to have here Marcello Mastroianni, with whom I worked for 24 years and with whom every movie was a real success,” explains Sophia Loren right at the beginning.

Asked about the secrets of a long marriage, she said that “I got married very young, when I was 16 years old, and he (e.n. Carlo Ponti) was the man I loved and whom I still miss,” confessed the actress.

One of the questions was what celebrity means and when she realised she’s famous. “When you think of you as a celebrity, your career is over,” summed up Sophia Loren. “You always have to think that something wonderful is happening to you, that you are a great actress, that you are doing good things for you and for your career. I never thought of myself that someday I’ll be famous, not even when I took the Oscar,” explained the actress.

Some of the most difficult roles were acted for Vittorio de Sica’s movies, about whom the actress talked with gratitude. One of these movies will be screened during TIFF, Matrimonio all’italiana / Marriage Italian Style (d. Vittorio de Sica, 1964), in which she acted alongside Marcello Mastroianni, and a Q&A session with her is scheduled after the movie. “De Sica was a miracle,” she concluded regarding the famous director.

As Romanian cinema is again on everyone’s agenda, Sophia Loren was asked if she would consider acting in a Romanian movie. “I would, but first I have to read carefully the proposals, to see if it suits me and my feelings, and to be a masterpiece. But I would take into consideration, every actor thinks about it”, said the actress. Also, she smilingly explained that she should take into consideration the fact that she’s not a teenager anymore. Sophia Loren knows about the Romanian movies from film festivals and from TV, “sometimes being the best movies made”.

During TIFF, Sophia Loren is being celebrated for her entire career, with the Lifetime Achievement Award. The event will be marked on June 4, at Cluj National Theatre, during the closing gala of the 15th edition of TIFF.

Editor’s note: Sophia Loren came to TIFF courtesy of the dream that Tudor Giurgiu, the president of the festival, has had right since the first edition of TIFF. Mihai Chirilov explained how they made it possible during TIFF Lounge.