BR EXCLUSIVE! Romania’s poorest regions perform above expectations and could become richer than the lagging regions of Italy or Spain by 2025 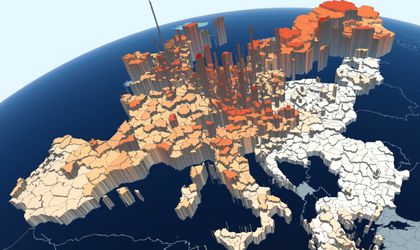 The lagging regions in Romania are largely performing above expectations in terms of economic convergence with the European Union’s advanced economies and may soon hit the stage of slowing convergence if fundamental endowments are not strengthened, a recent Word Bank report shows.

The regional “Economic Potential Index” (EPI), set by the World Bank and European Commission in 2017, offers a possible approach for operationalizing the concept of “potential” defined in the proposed objectives, focusing on identifying the factors that are associated with regional GDP per capita.

“Most lagging regions in Poland, Hungary, and Bulgaria appear to be underperforming on their potential. This suggests that significant growth potential remains in the short term. By contrast, lagging regions in Romania are largely performing above expectations and may soon hit the stage of slowing convergence if fundamental endowments are not strengthened,” World Bank’s experts said in “Rethinking lagging regions” report.

In fact, most regions in Romania have a low economic potential due to the lack of infrastructure and to the poor education of their working force, but experts have found out that their economies are growing much faster than those of the poorest regions in the neighboring countries.

According to the report, Europe’s “lagging regions” include poor “low-income” regions in Central and Eastern Europe, many of which are converging rapidly, as well as “low-growth” regions in Southern Europe, that are experiencing stagnant productivity and job destruction.

“In fact, the economic hierarchy of European regions is on track to experience a sharp change within the next decade – if the trends of the past decade were to continue, by 2025 the poorest regions of Romania, Poland, Hungary, and Bulgaria will be richer, on average, than the lagging regions of Italy, Spain, Portugal, and Greece,” the report estimates.

However, both sets of lagging regions – in Eastern and Southern Europe – face common challenges that constrain long-term growth prospects, including low levels of labor market participation, incomplete structural transformations, and large gaps in critical endowments like skills and institutions.

The experts give the example of Romania’s poorest region – Nord Est (including six counties in Moldova: Botosani, Suceava, Iasi, Neamt, Vaslui and Bacau) – and compare it to the poorest regions in Poland.

The six counties are located at a large distance (about 2,000 kilometers) away from the center of Europe and 375 kilometers on average from Bucharest.

“While these distances are large, the biggest problem in the region is the underdeveloped road infrastructure. There is no highway between the North East region and Bucharest, nor between the region and Transylvania or neighboring countries. The main road that links Bucharest to the North East county capitals, the E85 (European road), as well as the national road, the DN2 are in poor shape,” the report said.

“The road has only two lanes and is heavily used by trucks and long vehicles. That makes transporting people and goods a very challenging endeavor. It might take up to one day to reach Botosani, the northernmost county capital, from Bucharest,” the experts added.

In the case of the North East region of Romania, critical connective infrastructure linking the region to the national hub (Bucharest) and to European markets should be a top priority, according to the experts.

But the Romanian central government has still no plans to build critical infrastructure to connect the region of Moldova to the rest of the country.

In Poland, the situation is quite different. “It takes only two hours to drive from Rzeszów to Krakow, four hours to get to Warsaw or Wroclaw, seven hours to Berlin, and about 10 hours to Hanover and Hamburg,” the World Bank indicates.

The Nord Est region is the poorest NUTS-2 region in Romania, and one of the poorest in Europe. Its peripheral position, relatively low urbanization, and dominance of smallscale agriculture are some of the ingredients responsible.

But the experts working for the World Bank see a major advantage in the region.

“The region has a bright spot, however – the City of Iași. Iași is the third-largest university center in Romania (after Bucharest and Cluj-Napoca), with a student population of about 55,000. The universities in Iași bring to the city a constant flow of young and well-educated people, which is of critical importance in an environment of overall demographic decline and aging,” the report said.

Iași is only the 12th city in Romania in terms of economic output, but it is 4th when it comes to the number of migrants it has managed to attract.