Expat eye: Tip for anyone trying to learn Romanian – don’t bother with apps, lessons or practice 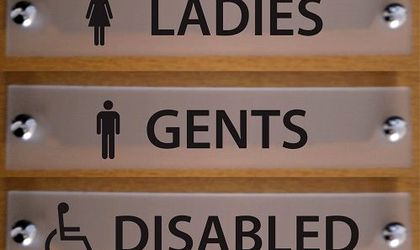 In our monthly take on expat life in Bucharest, BR’s British correspondent gets a sinking feeling when surprised in a toilet.

One thing that divides us expats (at least, long-term, English-speaking ones) is fluency in Romanian. Can you get by in the native tongue, or have you never really got beyond “doua bere va rog” – the Brit’s standard phrase overseas, along with please and thank you of course.

I’ve always liked to count myself in the former category, although I’m not as good as I should be, after 15 years here.

But last week a strange thing happened: I became a fluent Romanian speaker.

I was at a very large beer hall with a friend and our toddlers. (Start them young, I say…) She had gone outside with my elder child and hers, while I went to “use the facilities” with my younger son in his pushchair.

(On a side note, I have baffled more direct Romanian friends with my use of that euphemistic term before, when I asked if our train would have “facilities”, leaving them trying to guess if I was hungry, or wanted to buy a ticket onboard, or what…)

The cubicles in the women’s toilet looked too small for the pushchair, and I didn’t fancy (a), leaving the door open or (b), not being able to keep an eye on my baby. But fortunately, next door there was a sign for a disabled bathroom (which, before I get letters, across the UK and Romania, are commonly also designated for non-disabled users with accessibility issues such as, say, having a pushchair/stroller).

How civilized, I thought! Bucharest is truly changing.

Hmm. I opened the door (which, promisingly was unlocked), but couldn’t see the toilet due to the fact that it was buried under a pile of cardboard, while the rest of the space was full of detergents, cleaning equipment etc. Less water closet, more cleaning closet. But, in the immortal words of Annie, “when you gotta go, you gotta go”, so I proceeded. Thankful that, unlike many actual disabled users, I was able to move the cardboard, I set about doing so and then sat down to do my business, confident I’d be in and out in little more than a minute and that nobody would have time to come in.

So imagine my surprise when the door suddenly swung open, and I was greeted with the sight of a cleaner.

Now, there is only one possible response to opening a door to the toilet and seeing someone upon it, and that is to mutter “sorry” and close the door as quickly as you can, while you both feel slightly embarrassed.

At least, in my decades on the planet, that is all I have ever known until last week. But there is, I now know, another response, and that is to stand there, the door wide open as customers pass back and forth outside, and engage in a lengthy discussion.

The gist of it was that I shouldn’t be in the cleaning closet (to which I pointed out that it was in fact a bathroom), and then that okay, yes, it was a bathroom, but I shouldn’t be in it because I was not disabled. I replied that I couldn’t get in the normal cubicle with a pushchair, in between increasingly strong requests to close the door, which, after about a minute, were finally complied with.

My interrupted business concluded, I angrily set about addressing the issue with the loitering cleaner and another employee who had heard the commotion, and strongly voiced my view that as the biggest beer house in the region, surely they had space for a separate cleaning closet, did they expect me to abandon my son outside, how would a disabled person use that bathroom, it was exceedingly rude to stand with the door open having surprised someone on the toilet, and so on.

And suddenly I realized it. My Romanian was flowing freely and fluently on the back of my righteous indignation and – finally – I was a Romanian speaker!

So, quick tip for anyone trying to learn the language: don’t bother with apps, lessons or practice – just get surprised on the toilet.