BR Exclusive! Kevin Warwick: In 10-15 years we will have robots with human-size brains 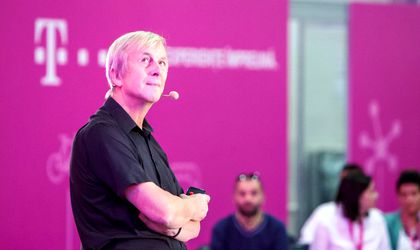 Kevin Warwick, 64, is one of the most famous researchers in the artificial intelligence field. Also known as Captain Cyborg due to the fact that he implanted a chip in his arm for testing, the professor at Reading and Coventry Universities is testing today new ways of communication with machines. Present at IMWorld 2018, Kevin Warwick took the time to talk to Business Review.

Robotics, Artificial Intelligence, biomedical, biohacking, cyborgs and self experimentation are the fields that made Kevin Warwick the world’s leading expert in cybernetics. A field that is not in the beginning anymore, but it still has a long way to go.

“I remember a dinner with Jeff Bezos a couple decades ago. He was talking about this new business of online selling and I was like ‘OK, interesting’. Today he is one of the richest guyS in the world, but back then I didn’t see the potential of his idea. If I had invested some money in his business, I would have a lot more money today. It is same with many ideas and technologies that are developing and even if we don’t see the potential, you never know what they’re going to become in the future,” says Warwick.

Working and developing robots, professor Warwick thinks the world will be led by robots in the future, by machines that will be able to take the important decisions. “Humans have limited capabilities. We sense the world in a restricted way, vision being the best of the senses. Humans understand the world in only 3 dimensions and communicate in a very slow, serial fashion called speech,” says Warwick, showing that robots with AI will be able to take into account all the things the human mind is not up to.

But this has a long way to go and meanwhile we shall see humans improve their own bodies’ capabilities, as well as their brains.

„Today’s technology does not allow people to create a super-eagle or owl sight, and we need to settle for much less. For example, tens of thousands of people have RFID chips under their skin that can remotely open their doors at home or at work or they can authenticate themselves on their own computer. In addition, many thousands of people have medical devices such as heart pacemakers and can be said to have become a body hack, but they are implanted devices of necessity, while the present material refers to those who make various changes in scientific purpose,” says Warwick.

While he has tested implants in the arm already, he says he is also going to test a brain implant. „Of course, there are many risks, like bleeding, the rejection of the implant, infections or the brain functions could be affected. But it will happen nonetheless,” says Warwick.

The final goal is to connect the brains from a distance in order to communicate without words or vision. But this comes with other risks, not only biological, but ethical, since you wouldn’t be able to hide your real feelings.

“It would be an excellent opportunity to better understand others. If I ask you whether you want to go out for a coffee and you say yes, I do not know if you really want to or you’re just being polite. It’s a trivial example, but I can better understand how you think. But it would have a meaning in the field of education where the teacher would be able to send brain signals to the students so they could understand more of what they are taught,” says Warwick.

Today we have robots with AI that can learn themselves and develop in the same way the human brain does. Doing the same moves in a homeostatic environment, the robots can learn from the things done in the past and not repeat them if not necessary, thus creating neuron-like connections. “The size of the robotic brain in not more than 30 to 50 million neurons today and does not reach the human dimension, which has over 200 billions of neurons. But I think that in 10-14 years we will be able to create a human-size robot, able to do things we can’t yet imagine,” says Warwick.

Kevin Warwick, professor at Coventry University, spoke with Business Review about the brain and the future of AI #imworld