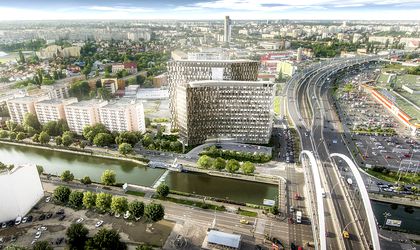 Romania’s modern office stock stands at around 3.3 million sqm, with most of it, 2.58 million sqm, in Bucharest.  The capital is followed by Cluj-Napoca with around 270,000 sqm, then Timisoara and Iasi with 180,000 sqm each.

According to Colliers International, developers and investors have become attracted to regional cities, and the market will probably change in the coming years.

For now, Bucharest leads the office segment by far, regarding investments, transactions and prices, but the market is also developing in the regional cities, Cluj-Napoca, Timisoara, Iasi and Brasov.

In total, 330,000 of around 6 million Romanian employees work in modern office buildings.

In recent years, job creation has accelerated considerably at national level. Therefore, employers, potential tenants of office buildings, are looking for almost as many employees in Bucharest as in Cuj-Napoca, Timisoara, Iasi and Brasov together, according to a Colliers International study.

However, over the last ten years, these four cities – the biggest regional office markets – have not benefited from deliveries comparable to those in the capital. They therefore have a stock of modern office space almost four times lower than Bucharest’s, while polls suggest that inter-nal migration will be concentrated in these cities. According to the World Bank, over 730,000 people could come to live here in the next five years, almost three times more than in Bucha-rest.

“When talking about the Romanian real estate market, investors’ most frequent concern is the lack of liquidity. While this can be a drawback, there should be a shift in perspective, because real estate is per se illiquid. It takes time to market and complete the sale of a property, but the situation is slowly changing,” said Anca Svoronos, senior associate, investment & debt advisory, at Colliers International Romania. The first semester saw the volume of real estate investments reach just over EUR 400 million, up 18 percent compared to the same period in 2017, a year which saw the best post-crisis level. For the time being, investments are mostly concentrated in Bucharest, but in the medium term, attention will be turned to regional cities as well.

For some foreign investors, regional cities have already become attractive due to good yields and potential for capital growth. UK fund First Property Group’s acquisition of the Maestro Business Center in Cluj-Napoca is proof that Romania is starting to follow the Polish model of development through regional cities, a much more sustainable growth pattern considering that they can influence the evolution of satellite towns and communes.

“The focus, in the end, should be on the elements that can create and build up liquidity in an office market: job growth, especially in industries that are heavy users of office space, such as IT services, new space supply versus demand, which is still imbalanced in regional cities, and the population growth that, for example, Cluj-Napoca is witnessing. So, current income, capital appreciation and hedging inflation are all strong reasons for real estate investment in regional cities. The new real estate heavyweights have just come under the spotlight,” said Svoronos.

The biggest office building transactions in the first half of the year were between Portland Trust and Lion’s Head Investment fund for Oregon Park in spring, and Campus 6.1, the first building of Campus 6, Skanska’s project in the Militari area, acquired by Austrian CA Immo for EUR 53 million.

According to Tim Wilkinson, capital markets partner with Cushman & Wakefield Echinox, last year the focus was on retail, but this year, the interest may switch to offices. He thinks that there is enough activity going on to see many transactions in the second half of the year.

“The volume of investment in the different asset classes will depend on the source of where new funds actually emerge from. We anticipate offices being the leading asset class in 2018 in terms of transaction volume, slightly ahead of retail. There is evidence of an increasing appetite from Western investors (European & US) across all asset classes, especially offices,” added Wilkinson.

The capital is, obviously, the most important office center in Romania, with more than double the stock of the other big Romanian cities together, supported by its size and around than 2 million population, of which more than 15 percent works in office buildings. Companies leased around 135,000 sqm in the first half of the year.

Estimate for the whole year of leased office surface – 330,000 sqm.

Vacancy rate is around 8 percent and decreasing in the last year.

Ought to remain the star of the show, being the biggest university hub outside the capital (and having the largest student density in the country, at over 200 students per 1,000 inhabitants, more than twice that of Bucharest’s). It is also the fastest growing region in Europe for hi-tech services, according to Milken’s Institute analysis. Companies leased around 10,800 sqm in the first half of the year.

The highest rent around EUR 13-14/sqm/month

The most important office project in the city is The Office, 60,000 sqm, developed by Ovidiu Sandru and NEPI Rockstle.

With a relevant foreign language skills and a high number of university graduates with a technical background have created a strong demand from more industrial corporates than in most other parts of the country.

Companies leased around 9,400 sqm in the first half of the year.

The highest rent around EUR 13-14/sqm/month.

Has been held back by the lack of an international airport, although the public authorities are working on one. Like Timisoara, it offers an interesting mix of graduates with an engineering background with strong language skills, meaning that this can be both an option for manufacturing and office operations. Companies leased around 6,400 sqm in the first half of the year.

The highest rent around EUR 11-12/sqm/month.

The most important office project is Coresi Business Park from Ceetrus, under development, with a final surface of 100,000 sqm.

Probably the youngest large city in Romania, which itself should form a strong argument for a bright future. Indeed, it has a smaller student population than the other two large regional magnets – Cluj-Napoca and Timisoara – but Iasi makes up for this with better labor force availability than the other two as well as lower wages. Companies leased around 3,800 sqm in the first half of the year.

The highest rent around EUR 12-13/sqm/month.

The 70,000 sqm United Business Center, part of Iulius’s Palas Iasi, is the most important project in the city.