Take a look at the modern spaces, the 200 ACI Worldwide employees are working in, the place where anti-fraud software solutions for online payments are developed 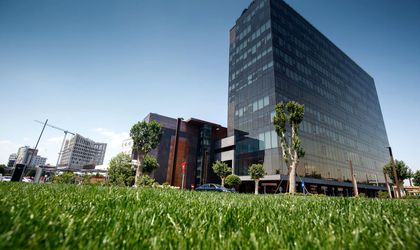 Extended „open-space” areas encouraging the communication between co-workers, informal office premises, multifunctional meeting rooms, open air terraces, recreation areas, natural light and an easy-going atmosphere – these are the features of the new offices of ACI Worldwide in United Business Center 2 (UBC 2) building of Openville Timişoara mixed-use project. The American company occupies two of the 12 floors of the building developed in the near vicinity to Iulius Mall.

At the beginning of July ACI held the official opening of their new headquarters, taking this opportunity to announce that they are expanding. The company, one of the main world providers of solutions for electronic payments and banking services in real time, has been in Timişoara for more than ten years, during which they „strongly emphasized the finding of talents as part of its program for long term internships, and the collaboration with the renowned local technical universities”. With more than 200 employees in Timişoara, the expansion generates an increase in the number of vacant jobs in the region, as the recruitment of 50 new employees is in the pipeline. “We have an incredibly strong Timişoara staff and our expansion is testament to their commitment and their talent”, Phil Heasley, CEO and general manager of ACI Worldwide said in the press conference. “The payments industry continues to see tremendous disruption, driven by the real-time expectations of today’s consumers, who want fast payments with immediate settlement. This team plays a significant role in developing and strengthening ACI’s Universal Payments offerings, which are used by some of Europe’s and the world’s largest merchants, intermediaries and financial institutions”, ACI Worldwide General Manager added.

The new offices of the American company are one of the most modern in Timişoara, as the emphasis in the fitting-out of the interior space aimed at the comfort of the staff. Thus, although open-space, the offices provide privacy to the work areas by an unprecedented manner of separation using wooden curtains. Recreation areas are also present, and the employees can relax while playing a game of pool, or exercise on the stationary bicycles with a view to the mall. Equally practical and moreover, unconventional, are the „collaborative area” spaces fitted with armchairs and sofas with atypical shapes and joyful colors. For their lunch break the 200 ACI employees are provided with kitchens in their own headquarters, as well as the food court area or the restaurants in Iulius Mall Timişoara, where they take advantage of up to 25% discounts due to the Partner Card that certifies their belongingness to the UBC community.

Another perk worth mentioning is the services located nearby, in the mall, which are highly useful especially after the office hours: from fitness center, medical offices, cleaner’s, laundry services, travel agencies, hundreds of stores, a multiplex cinema, to kindergarten and offices of public institutions where they can pay their taxes, get their driver’s license or passport. UBC 2 is the first of the seven office buildings (more than 130,000 sqm) to be developed by Iulius in the Openville ensemble, the largest mixed-use project in west Romania. UBC 2 has an area of 18,000 sqm and was opened this January, being fully leased by IT and automotive companies. Parallel works are being performed for other two office buildings (31,000 sqm) and a multi-level parking lot with more than 900 spaces, to be completed this autumn.