Apple is working on a foldable phone, according to a patent registration 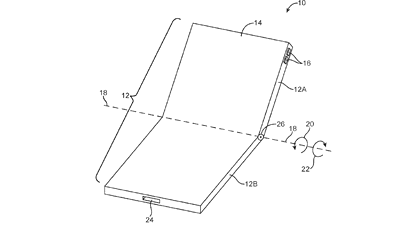 The next ‘big thing’ in smartphone technology seems to be the foldable device. After Samsung launched Galaxy Fold, at a price of almost USD 2,000, Apple has filed a patent application for a foldable phone. The design plans were filed in October, 2018, and shows that the company has been trying to make a foldable phone for quite some time, according to The Verge.

Samsung already announced the Galaxy Fold, but it will be available only in May. Meanwhile, there is a possibility that Huawei will launch and make available a 5G foldable phone that is supposed to appear at Mobile World Congress next week.

Apple’s patent describes a display with hinges that can fold in half or in thirds. Yet, the display can be used for phones but also for tablets and laptops and wearable. “It would be desirable to be able to use flexible display technology to provide improved electronic devices”, Apple writes in the application. The patent means that the idea hasn’t been approved yet, but it shows without doubt that the company is working on a foldable device. According to a story on CNBC one year ago a new foldable iPhone could be released in 2020 and it could be used as a tablet.