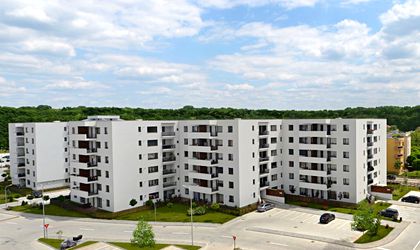 Romanian real estate company Impact Developer & Contractor will invest EUR 44 million in the third development phase of Greenfield, its residential project in northern Bucharest, the company announced this Thursday. The investment will go into 888 new apartments and the related infrastructure.

Platanilor Ensemble, the name of the project’s third development phase, is developed on a 10 hectares plot of land and it will features 39 four- and five-storey blocks which will feature atotal of 888 apartments. The first 21 blocks (476 apartments) will be delivered at the beginning of 2017 and the next 18 blocks (412 apartments) will be completed in the third trimester of the next year, said company representatives. The project will feature one- two- and three-bedroom apartments and it also boasts a 6,000 sqm park with playgrounds, a multifunctional sports ground and fitness and recreation areas.

The decision to expand the project is the result of good results posted so far, said company representatives. Greenfield’s first phase was developed between 2007 and 2010 and it is fully sold. It covers an area of 10 hectares and includes 680 apartments and villas in five ensembles. The second phase, Salcamilor Ensemble, developed between 2014 and 2016, covers an area of 7 hectares and includes 35 buildings with 924 one- two- and three-bedroom apartments. Currently, it is 85 percent sold, according to company data.

BR EXCLUSIVE. Impact to start construction of a 660-apartment project in Constanta this...