Thomas Waitz, European Parliament: What is happening in 2/3 of Domogled National Park Forests is not following the goal of nature protection 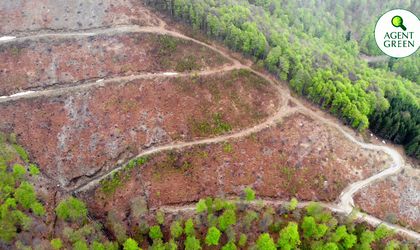 Romania has 13 National Parks from which 12 are administrated by Romsilva. Including Domogled National Park, the biggest, with 62.000 hectars, which is also the most destroyed of them all according to Agent Green NGO and EuroNatur.

Thomas Waitz, member of the Agricultural, Pesticides and Petition Committee in European Parliament and a representative of Green Party Austria, has paid a visit to Romania in order to assess the situation of the protection of Romanian virgin forests and national parks, as a member of the European Parliament. Also, his visit aimed at shedding light on the gray areas of illegal logging. Thomas Waitz visited Domogled National Park last week in order to find out if allegations that natural heritage is being destroyed are true.

“We visited a part of the National Park which was managed by Romsilva and which clearly demonstrated violations of the existing Romanian and European law. For example, we have seen 5 to 8 meter wide tractor roads hit into the forest, but by the rules they should not be wider than 4 meters. Furthermore, we could witness that not only logs were transported but whole  30 to 35 meter long trees with branches. This is against the rules and causes great harm to the wayside; we noticed a lot of damage to the bark of the surrounding trees. The branches where not left in the forest but dumped next to the forest road in the valley. The log was done by a private logging company, Romsilva has not controled the logging but has committed the wrong doing of the loggers,” said Waitz.

Romsilva managers, who met with the official admitted that situations like the one witnessed by Thomas Waitz and his team mean a loss of control and that timber companies must be more closely controlled by the National Park/ Romsilva but also by the Ministry. In case of violations, penalties must follow.

Furthermore, Thomas Waitz visited parts of the national park which lie in the so called buffer zones, next to the Unesco world heritage site,  and which are also exploited economically.

“What I saw was intensive forest management, professionally done. This would be a sustainable way of doing intensive  forestry if we forgot that we were seeing this in a national park! The so-called <

The main points of criticsm:

According to an investigation made by Agent Green NGO and EuroNatur, part of an international campaign called Save Paradise Forests, “almost all national parks in Romania fail to meet international conservation criteria, which are supposed to prioritise conservation objectives within management plans and forbid industrial exploitation of resources. Large areas of forests within Romanian national parks are simply commercial logging sites, which do not differ from industrially logged forest zones outside the protected areas. Logging is happening with approval of the national park administrations and with full sanction of the Romanian Government.”