Survey: most Romanians prefer dry, red wines and choose it according to winery 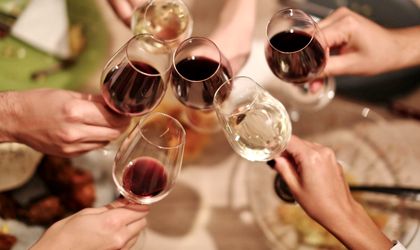 Most Romanians prefer dry and red wines and choose their wine according to the winery, a survey by CrameRomania.ro and ReVino.ro shows.

In recent years, Romanians have paid greater attention to their consumption and selection of wine. The winemakers (32 percent), grape varieties (31 percent), wine colour – white, rose or red (11 percent) – and the time of consumption (10 percent) are essential factors in choosing a suitable label.

Regardless of the source (from Romanian or foreign producers, or home brew), 45 percent of the respondents said they enjoyed wine two or three times a week, while over 91 percent said they get it in glass bottles.

“We decided to carry out this analysis in response to today’s needs,” says Alina Iancu, founder of CrameRomania.ro and Revino.ro. “We realized that real market data would be of great help to us, because in the absence of concrete figures, speculation and our personal opinions would have dominated discussions between amateurs as well as those between specialists. In addition, in comparison with the wine industry in developed countries, we came to the conclusion that we do not know who the Romanian wine consumer is in 2018, or their consumption habits.”

“Romanians mostly buy wine for their own consumption, but they also gift it. We found that sparkling wine is still associated (57 percent) with special occasions, but 34 percent of respondents prefer it at any time,” adds Iancu.

Some 60 percent of shoppers base their purchase decision solely on the information available on the shelf in store. Only 14 percent do research on the internet before buying a wine, while 9 percent seek advice from a specialist.

Most Romanians pay up to RON 50 for a bottle

44 percent have visited a Romanian winery

A share of 44.57 percent of respondents have visited a winery in Romania, and 36.94 have never been to one.

“After wine, 35 percent of Romanians drink spirits such as tuica (plum brandy), rum, cognac and whisky, and 35 percent beer. We discovered that 12 percent of respondents prefer cocktails or other mixed drinks. At the same time, dry drinks are becoming more and more popular in Romania,” says Iancu.

And because educated wine consumption education is built over time by various actions, more Romanians are paying visits to wine producers. In addition, existing and future consumers are also increasingly attending wine events, and are keen to tell their friends about their experiences.

The wine consumer survey was conducted between 17 January and 16 March on a sample of 2.645 Romanian men and women, both in the country and abroad. The data were collected via the online platform eSurveysPro and interpreted by CrameRomania.ro and Revino.ro.