Study: auto industry major pillar of Romanian economy, alongside retail and IT

The auto industry is one of the major pillars of the Romanian industry, alongside the retail and IT industries, a study by Euler Hermes argues. The auto industry employs over 150,000 people and in 2016 contributed by 47 percent to exports.

According to the study, the car industry is enjoying high returns. In 2016 it recorded an impressive year-on-year growth rate of 9 percent and the global average went up by 1.6 percent. If the growth rate continues, the study argues, the increase will stand at around 6-7 percent per year by 2020.

Until now, the sector was driven by car makers, with Dacia Renault ranking 11th in Europe, in 2016, when it produced almost 360,000 units. Currently, car parts industry is driving the growth.

The suppliers market includes both own factories, as is the case of Daimler, and numerous contractors, such as Delphi, Draexlmaier, Leoni or Continental, as well as small local entrepreneurs, who act like providers for the big producers.

The big players on the market are not transparent when it comes to estimates and financial data, and usually banks provide financing at group level, and usually in better conditions than local banks. 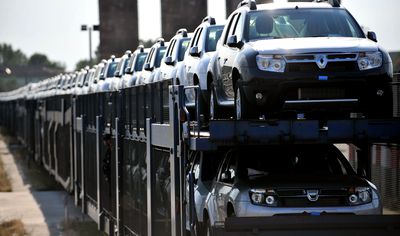 Also, the financial leasing market has increased by 25 percent in 2016, up to EUR two billion, of which almost 77 percent are cars and light commercial vehicles. Companies accounted for 97 percent of total financial leasing customers, followed by individuals 2 percent and 1 percent of the public sector. The fleet of operational leasing vehicles increased by 8 percent to 60,000 vehicles in 2016 (about 13 percent of all new car registrations), with similar growth expectations for 2017.

The total turnover of the automotive sector in 2016 exceeded EUR 20 billion, driven by exports, as the local market is relatively small and focuses on second-hand vehicles.

Join the 4th edition of Foreign Investors Summit and see the impact of the manufacturing sector on the local economy and growth strategies for the industry.