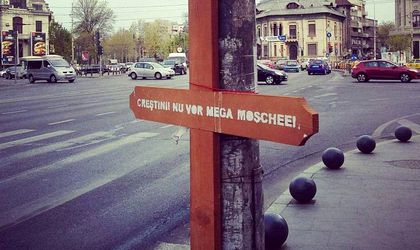 Ex-French foreign legionnaire Catalin Berenghi says he is fighting for keeping Romania as a Christian country and has positioned 500 wood crosses inside Bucharest.

Berenghi is a fierce opponent of the planned construction project of a Turkish mosque in the Romanian capital.

“Today we have placed 500 sanctified wooden crosses in order to raise the awareness of citizens, regarding the danger stemming from the construction of Mega Mosque in Bucharest,” wrote Berenghi on his Facebook page. In some of the pictures, he is seen together with other men carrying the crosses.

He added the crosses were placed on the main roads. All had the same message, written in white: “Christians don’t want the Mega Mosque”.

Turkish president Recep Erdogan said last month the mosque project is in the permitting stage and the muftiate in Romania is handling these operations. The muftiate got a piece of land near Romexpo Exhibition Center in Bucharest from the Romanian authorities.

Erdogan said that in exchange, Romania will be able to build a chapel and an accommodation facility for pilgrims.

The Turkish president said the mosque will be the “the most beautiful expression of dialogue and solidarity between the two countries”.

The project has also sparked a controversy between Romanian politicians. For instance, ex-president Traian Basescu said the mosque would pave the way for Romania’s islamization, while ex-PM Victor Ponta suggested it was beneficial for Romania. Actually, during Ponta’s tenure at the government the muftiate got the land for free.

Berenghi made the headlines last Autumn when he buried some frozen pigs on the land that was allotted to the muftiate. He said that in this way, the muslims would drop this project.