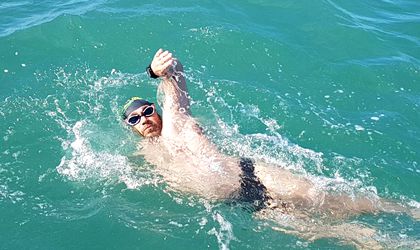 Petrosani-born librarian Avram Iancu became the first Romanian to cross the English Channel. He managed the feat on Monday, after 18 hours of swimming, at his fourth attempt.

Iancu crossed the 62 kilometers wearing only speedos and a cap. As per the requirements of the Channel Swimming Association (CSA), which requires swimmers to be equipped with a sleeveless and legless swim costume not offering thermal protection.

He finished the race on Monday night after 18 grueling hours of swimming. “On 7 August 2014 I became the first Romanian to attack the icy waters of the English Channel, officially and according to the rules, a first for Romania. (…) Yesterday the final battle was fought! I won! – after 62 km and almost 18 hours of physical ordeal, but especially mental, as I have never lived before, I slayed the beast! (…) After the only Romanian flag flew permanently at the mast on its way to France, I am glad to return to Romania, my home country, where I was born (in Petrosani), and raised, the country I will never leave, the country I fight for, I work, and that I will build with my humble contribution, alongside other Romanians. Not least, I want to thank God, who allowed me to succeed. Long live Romania!,” Iancu said in a Facebook post on Tuesday.

Initially, Iancu’s last attempt was scheduled to cross the Channel in July, and later the swim was postponed to August. Due to adverse weather, he had to fly back to Romania, and returned on Saturday, when he was allowed to swim.

Since the first successful swim of the English Channel in 1875, only 1,386 people have managed to pull out the feat solo, the CSA webpage informs.