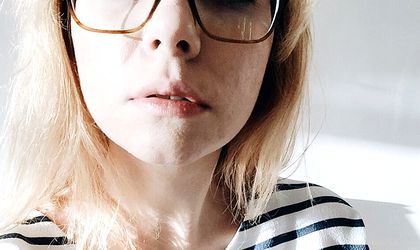 Young. Driven. Creative. Smart. She left the Romanian advertising world in 2014 with the desire to make it in one of the most competitive markets in the world: London. And she succeeded.

The interview with Maria Nazdravan, creative copywriter MRM Meteorite, is the first in a series called “Romanian marcomm successful people in UK”.

I still have no idea. The idea of moving away has always been at the back of my head, but the UK was never on my list. And then in October 2014 I was visiting London for the first time to meet a friend and I was mesmerised. It instantly felt like home – or, rather, all the things I didn’t know I was missing at home. I quickly talked to a few creative directors to see if I had a chance to make it here and a month later I was settling into my first houseshare in London. Another month later I was getting my first brief at MRM and still had no idea how it all happened.

At first, I felt like I had to prove myself a little bit more than back at home. There’s a certain arrogance Brits have towards their own language. I’ve had recruiters say to my face that it’ll be tough to get a job as a creative copywriter since I’m not a native speaker, right after having complimented my English. But once you nail your first few jobs, everyone forgets you’re not a native.

Since advertising is very much based around creative teams here, I’ve also found a brilliant creative partner with whom I work on all projects. It’s insane how much easier my job got ever since. We’re now what they call an international team, something quite common around London, and we take part of monthly meet-ups with teams from other agencies for networking.

Why have you chosen MRM Meteorite (did it help that in Romania you worked also for MRM)?

Since I moved to London without a plan, I was doing interviews all around the city, meeting recruiters and creative directors. MRM-Meteorite happened to have an opening and they completely charmed me at the interview. And yes, it definitely helped that they were already familiar with my work and genuinely excited to have me.

The main challenge still is the British working style. They’re very calm, calculated, and like to take things easy. Which is the complete opposite of the beautiful chaos I’ve found in Romanian agencies. On one hand, it means people actually leave at 6 most of the time (but we also start at 9 sharp). On the other hand, sometimes the work ends up on the average side because you’ve spent ¾ of your time in meetings explaining an idea to different people and only ¼ actually working on it. It’s all understandable though: they market is more mature here, clients are less keen to take risks and the budgets force you into being more careful on how you spend them. So the challenge has been challenging the system itself in the most tactful way possible.

I’ve found that most foreigners find it challenging to work with Brits at the beginning. As an outsider it’s hard to tell what they actually mean and sometimes it’s tiring to read between the lines. They’re insanely polite and afraid to offend, they say “yes” when they mean “no”, or that things are “not too bad” when they’re actually impressed. And they genuinely enjoy talking about the weather, something I’ve started to understand living in London and going from snow storms to clear skies in just a few hours. Some people never adjust and are constantly miserable living among Brits, but I think that once you “crack” them they’re not too bad.

I can’t speak for the UK as a whole, but I can tell that London at least is a whole different world. It’s so much more mature, and, just like transitioning from young adult to proper adulthood, it comes with ups and downs. People are more specialised and experienced, and a lot of them have worked for other markets and have moved around the world a bit. This also means that the competition is very tight and it’s harder to get noticed. Craft is very important here, but unfortunately sometimes at the expense of the creative thought behind it.

Creative directors in leading agencies are starting to talk about changing the way we do advertising and focussing our efforts towards making the world slightly better. They’re starting to question creative teams as the classic copywriter + art director duos, and shifting towards bringing in people from other creative backgrounds. You can already see it happening with young creatives fresh out of uni who are no longer great at just one thing: you have copywriters who are multi-channel storytellers who can also code and DJ and no longer limit themselves to an outdated job description. It’s exciting.

I can’t see myself forever anywhere really. I’d like to see what other cities and cultures have to offer. Advertising is such an open industry that you can easily move cities, countries or even continents. Paris, Amsterdam, New York or San Francisco are very tempting.

I do miss Romania at times, and I miss the creative chaos in agencies there most, but I wouldn’t come back. I’m sure that people who have lived abroad will agree that it feels almost unconceivable to move back after getting used to the standards of living here. But I do get severe FOMO (fear of missing out) whenever I see another creative project popping up at home and I wish I was there to give a hand or just enjoy it. Bucharest is so up-and-coming and at times I wish I was part of it.

There’s this popular Romanian saying about turning an unfortunate situation around that doesn’t make much sense in English, but I think it summarises quite well what makes us stand out. We’re really great at creating something amazing in spite of low budgets and stubborn clients. We don’t settle for mediocrity just because it’s the easy path that gets us home in time for dinner. We’re sharp thinkers and hard workers. Brits are a little taken aback when they see this, and I think anyone who wants to make it here should flaunt it.

I miss the quick pace and turnaround of projects in creative. I miss the chaos and the lack of discipline at times, it’s how ideas spark, at least for me. And I miss the plain and sometimes cruel honesty of Romanian creative directors. The people I loved working with most (and from whom I’ve learned most of the things I know today) are people I’ve battled, who have taken down my ideas as much as they’ve lifted them.

Most of my time is dedicated to Vauxhall – the British Opel. They’re a very traditional brand here and every project is a little step ahead to catch up with their more innovative contenders on the British market. We’ve recently done a pretty big project for CleanSpace, a pollution tracking app, which we’ve sent to Cannes Lions Advertising Festival. Otherwise, there’s some pitch work I probably shouldn’t mention yet and an agency self-promo I hope you’ll hear about soon from advertising blogs, not myself.

It’s strange, but one of the projects I’m most proud of is not even mine. My art director and I mentored a placement team for a month and their work actually got picked by the client on a brief we worked on together. I’m also proud of the work for CleanSpace I mentioned earlier, because getting it out was such a struggle. And I’m very proud of the self-promo we’re about to launch, which was born out of a joke between my art director and I that our creative director happened to find just as funny as we did.