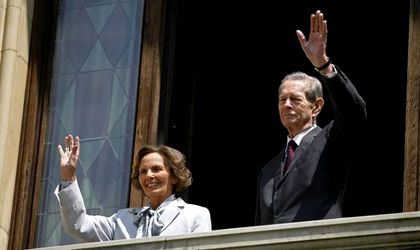 Queen Anne of Romania, the wife of former King Michael I of Romania, has passed away at 92, said the Royal House in a statement.

The queen died on Monday in a hospital in Switzerland.

Queen Anne was born in Paris, the only daughter of Prince René of Bourbon-Parma and Princess Margaret of Denmark.

She is survived by her husband and five daughters.

Queen Anne attended the Parsons School of Design in New York from 1940 to 1943 and received a military distinction for the volunteer work she did during the Second World War.

She got married to King Michael I of Romania in 1948. In June 2008, the royal couple celebrated their Diamond Wedding Anniversary with 3 days of events in Romania.

Romania’s former King Michael I had retired from the public life in March, citing his poor health condition. He passed the crown to his daughter, Princess Margaret.

The Royal Family announced that a seven-day period of great mourning after the funeral and then another 40 days of mouring.

The burial ceremony will take place in the new catherdral at Curtea de Arges.

The body of Queen Anne will be placed out for one day in the Hall of Honor of the Peles Castle, and then for a day in the Throne Room at the Royal Palace in Calea Victoriei .

People can bring flowers, garlands or wreaths for the queen starting tomorrow at the Royal Palace in Calea Victoriei.

President Klaus Iohannis: „During her honorable lifetime, Ana of Romania was the expresson of the most distinct values of decency , devotion and love for the country whose name she had.”

PM Dacian Ciolos: „Her Majesty Queen Anne of Romania will remain a symbol of nobility, discretion and dignity, valies that integrate the defining contribution that the Royal Family had and has for the Romanian society. Together with King Michael, Her Majesty Queen Anne represented Romania and defendeted its interests with honor, pride and love for the country, going over all the injustices that the Royal Family had to face.”

President of the Senate, Calin Popescu-Tariceanu: „It is a great loss for His Majesty King Michael I, as well as for the Romanian people. Romanians will keep her in memory with respect”

President of the PSD, Liviu Dragnea: “It is a sad moment for the whole nation and I think we should cherish the memory of Her Majesty, with good sense and dedication, as she has lived all her live close to the destiny of Romania.”

Mayor of Bucharest, Gabriela Firea: “Her whole life was a decent presence, with a lot of good sense as she has honorably represented the monarchy in our country. She has really deserved the name of ‘Queen of Romania.’”

Daniel Constantin, co-chair of ALDE: “Her Majesty Queen Anne, the queen of all Romanians, has stepped into a world that is better and quieter.”

UK Ambassador to Romania, Paul Brummell: “I am deeply saddened by news of the death of Her Majesty Queen Anne of Romania. Condolences to the Royal House.”