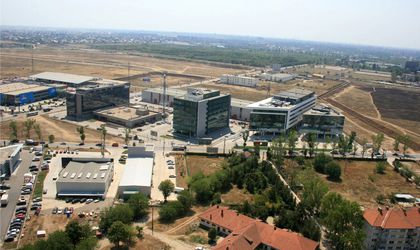 According to representatives of real estate agency Palace Estate, Pipera can function as a residential alternative to the Barbu Vacarescu area.

The rapid increase of the Floreasca – Barbu Vacarescu – Pipera office area brought clientele for the residential segment of the market as well, the real estate listings here being sold for prices between 1,300 – 1,500 EUR/ built sq. m + VAT, Palace Estate said in a press release.

Most of the corporate employees that work here have an average monthly net income of EUR 1,000 and cannot afford to buy a three-room apartment priced at EUR 200,000, which is now the average price level with VAT and one parking place included for a two-bedroom unit. After the completion of infrastructure works in the Pipera area, the residential condominiums here have become an alternative for those in Barbu Vacarescu, the prices of the apartments in Pipera ranging between 950-1,100 EUR/ built sq. m + VAT.

In the last couple of years, the improvements of Pipera area have been visible: Pipera Plaza, a strip mall anchored by Lidl and occupied by tenants such as Starbucks, Takko, Pepco, dm or Deichman has been inaugurated in 2015, while last year part of the modernization works for Pipera bvd have been finalized. Due to better prices for the lands here, developers built here projects with larger apartments and 25 percent to 35 percent smaller prices per residential unit.

We expect that Pipera area will develop with projects addressed to corporate employees working in the Floreasca – Barbu Vacarescu – Pipera area, with monthly income per family that doesn’t exceed EUR 2,000. They are coming from neighborhoods such as Militari, Drumul Taberei, Titan or Berceni and are looking for apartments with two or three bedrooms. The smaller apartments, studios and one-bedroom apartments, are targeted by minor investors that are buying as long term investment, renting the units, the agency’s representatives said.

Under the conditions of the approval for the new law which eliminates the VAT for houses with prices under RON 450,000 (EUR 100,000), we estimate a supplementary increase of demand, Palace Estate representatives argue.

Barbu Vacarescu as a residential area remains an option for premium projects, which can target the middle management of multinationals, freelancers or small entrepreneurs, with monthly medium incomes per family between EUR 3,000 – 4,000. For them, the area that they live in represents a confirmation of their social status, the vicinity of the workplace offering an increased comfort, Palace Estate representatives said in a press release.