Massive protests in Romania over draft pardon bill, changes to Penal Code for second Sunday in a row 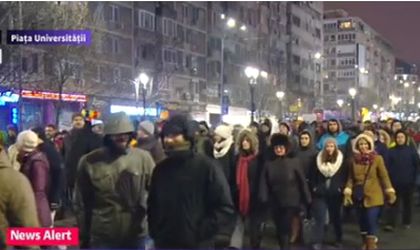 Tens of thousands of people took to the streets in Romania’s main cities, on Sunday evening, to express their anger at the government’s plan to roll out a pardon bill that would see several thousands prisoners get out of jail earlier due to the reduction of their sentences.

People are also protesting against planned changes to the Penal Code and Penal Procedure Code. The Ministry of Justice has scheduled a public debate on these two initiatives on Monday.

Over 50,000 people were attending the protest in Bucharest, while several tens of thousands of protesters were registered across the rest of the country. For instance, some 10,000 people took to the streets in Cluj-Napoca. According to media reports, there were over 5,000 people out to protest in Timisoara and Sibiu cities. Several hundred Romanians also protested abroad. In total, over 90,000 people attended the protests, according to an estimate by Digi24 TV station.

In Bucharest, the crowd of protesters gathered in the center of the city, at Universitatii Square, and went on a peaceful march that included planned stops at the media watchdog CNA, the Ministry of Justice, the HQ of the Ombudsman and the Government.

According to media reports, the controversial changes to the legal framework could be passed through Parliament, although the center-left government PSD-ALDE led by Sorin Grindeanu had initially planned to approve them through emergency ordinances.

PM Grindeanu said that he respects the right of the people to protest, adding that he had an “unpleasant surprise” when he saw president Klaus Iohannis joining the protest, last week, in Bucharest.

90,000 – the estimated number of protesters across Romania

The people that are out of the streets fear that these draft bills will erase the progress made by Romania on combating high-level corruption and the politicians that were sent in jail could get out earlier, while others will not receive jail sentences any more.

The protesters are also angry with certain TV news stations, accusing them of manipulation and are calling for the CNA to step in and put an end to these practices.

“The manner in which they will be adopted, either through an Emergency Government Decision, either they will be submitted to the Parliament as draft bills, by assuming responsibility, all these methods are legal,” said the PM, adding that the planned changes were put up for debate by the Ministry of Justice.

This was the second Sunday in a row in which protesters swarmed the streets in the major Romanian cities and abroad. Since then, president Iohannis has started procedures to organize a referendum on the anticorruption efforts in Romania. The people will be asked if they want the authorities to pursue the anticorruption agenda going forward.

The local media reported that tonight’s protests were the largest ones since the Revolution from December 1989 that toppled the regime of communist dictator Nicolae Ceausescu.