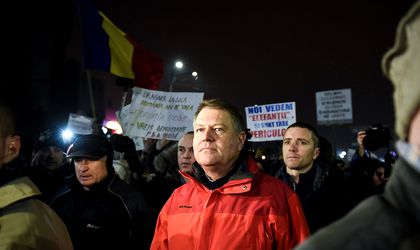 Romanian president Klaus Iohannis announced that he plans to initiate a referendum over the intention of the government to enforce a pardon bill and to change the Penal code, claiming that the current political class is trying to dent the country’s anti-corruption efforts.

His decision comes one day after he attended a major protest in Bucharest, with around 30,000 people, who asked for these bills to be withdrawn.

“This has become a national themee. It is obvious that there is a wider interest for the change of the Penal Codes and for the pardon. If so, I will put out this topic for public debate and popular vote. I will start the procedures for this referendum, a referendum in which Romanians can express themselves, they will say if they agree with these moves or not,” said Iohannis.

He added that these changes proposed by the PSD-ALDE ruling coalition were not mentioned in their political manifestos before the general elections, so they should be up for a vote.

The president’s announcement is set to widen the divide that exists between the ruling coalition and the head of the state.

After Sunday’s elections, the president of the Social Democratic Party (PSD), Liviu Dragnea, accused president Iohannis of initiating a coup. He added that the current government will not cave in to pressures coming from the Cotroceni Palace.

According to the current legislation, the president can ask for the organization of a referendum in 20 days if he does not get an answer for the government.

The leaders opposition parties PNL and USR said they supported the move of the president.

The president’s announcement came hours after the government announced the draft public budget for 2017. At this moment, Romania doesn’t have a budget for 2017 that was voted by the Parliament.

We could say that Romania is in a political crisis, until the results of the referendum are in. In order for the referendum to be valid, it needs to have a turnout of at least 30 percent of all the registered voters.

Meanwhile, Dragnea said that the Parliament plans to organize two referendums this spring: one for defining the marriage as an union between a man and a woman and a separate one for the removal of immunity in the case of politicians.