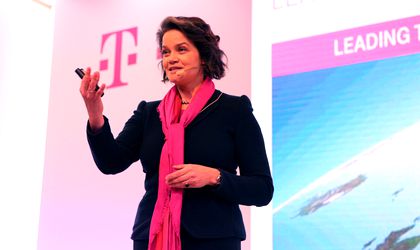 With a EUR 15 million budget, a coordinated international effort and ample dedicated resources, the new identity of Cosmote and Romtelecom into Telekom Romania stands out as the rebranding of the year. BR investigates how easy it will be for the German brand to stand out in Romanians’ minds and what bang it will have on the market.

“The whole rebranding exercise involved an international team which included Romanians, Dutch, French, Greeks, Germans…. There was a lot of top talent resource allocation to get it done,” Claudia Nemat, member of the board of management Deutsche Telekom AG, Europe and Technology, tells BR.
More than 2.000 people worked on over 100 complex projects in marketing, sales, IT, HR and real estate. The IT teams dedicated 68,000 working hours to implement the changes, including the joint website and the single contact center, which the companies calculated was the equivalent of 35 years of work concentrated in just four months.

Besides an integrated customer approach, Telekom Romania will also mean a unified employee experience. By the end of the year, more than 500 workshops will have been run for all Romtelecom and Cosmote Romania employees – a total of 1,855 training hours – introducing the new brand, with its values and philosophy, and boosting employee commitment in order to deliver on the promise of the new Telekom Romania brand.

The rebranding cost EUR 15 million. When questioned by Business Review, Telekom Romania officials did not provide a breakdown of the investments.

The creative part of the campaign was implemented by GMP and Webstyler, while Media Investment, part of The Group, is in charge of the media planning. The agencies signed a two year contract.

Thus, Media Investment is managing the Telekom account, after winning a pitch that took place at the end of 2013- the beginning of 2014. Another four media agencies participated in the pitch.

Apart from the media pitch, there was a pitch for the creation part, which was won by GMP. Another three creation agencies participated in that pitch,” said officials.

The rebranding was announced over two days, on the first of which the company made the official announcement at a press conference attended by Romanian PM Victor Ponta, ANCOM president Catalin Marinescu, as well as local and regional officials of OTE and Deutsche Telekom, such as Claudia Nemat, Deutsche Telekom board member for Europe and Technology, Hans-Christian Schwingen, chief brand officer at Deutsche Telekom AG, and Nikolai Beckers, CEO of Romtelecom and Cosmote Romania.
The second day was dedicated to interactive events in three major cities: Bucharest, Iasi and Cluj-Napoca.

While Romtelecom and Cosmote will be active on the market as Telekom Romania, the companies under their wing will keep their appellations. “The names and identities of Germanos Telecom Romania, Sunlight Romania (the Bucharest subsidiary), NextGen Communications and Telemobil, as well as the names of the services, will not be subject to the rebranding,” company officials told Business Review.

Dialing it up a notch

Leaving the EUR 15 million rebranding effort aside, the question is how well Romanians will react to the German brand, which replaces two household names?

They add that the two operators are currently addressing slightly different customer segments. “While Romtelecom is the undeniable leading provider of high-quality integrated services for the enterprise market and the most significant player in some of the fixed residential markets, Cosmote is still perceived as affordable mobile option primarily for the residential segment,” they say.

Telekom officials told BR the rebranding was a long-term process that would take years to complete. Nikolai Beckers, CEO of Telekom Romania, sums up, “This is not a 100 meter sprint.”

“We had a similar experience in this field in the Republic of Macedonia, where we also started to build the T brand and TV from scratch. Building the brand and creating something customers consider valuable and are willing to pay for are things we cannot manage in one or two quarters – I believe it will take a period of five years. Five years is needed to move the market because it is not only about us; it’s about understanding that if you spend nothing, in the end you get nothing,” Nemat told BR.

She added that while Romania is, population-wise, the third largest market after Germany and Poland where the Deutsche Telekom group has T in Europe, the brand is fighting a harsh price battle locally.

“The level of investment in a country’s networks varies because countries are competing against each other for the best capex, and from my perspective it has of course to do with the macroeconomic situation. (…) Romania is a very tough market for us. The average revenue per user is only EUR 5, so from a ROI perspective, Romania is a pretty difficult market,” Nemat said.

On the short term, the impact on the migration of customers will be negligible, Adrian Ciobanu, managing director of Reimens Group, told BR.

“The consumer’s perception will change on the medium and long term only if the quality of customer service improves significantly. In the case of Vodafone and Orange, the companies they took over, Connex and Dialog, had a culture of customer care services, with the quality of services having a special status in the commercial policy. T Mobile took over two companies that come with big challenges in this field. We will find out in a year or two what targets the Germans have,” said Ciobanu.

According to the KPMG experts canvassed by BR, “The Romanian telecom market has gone through a shy consolidation in the last few years, but the current large number of electronic communications operators – approximately 1,500 at the end of 2013, according to an ANCOM annual report – invites further consolidation, be it in the TV, internet or fixed/mobile voice markets.”

They describe Romania as “one of the most competitive markets in the EU with still different competitive landscapes in each of its sub-markets: a mobile service penetration of more than 120 percent and ARPUs as low as EUR 6.5. Also, a somehow constant number of fixed telephony lines, 4.75 million, and a fixed broadband access penetration rate significantly lower than the EU averages, 46 percent of Romanian households, despite fairly good broadband coverage, especially in urban areas.”

Moreover, the Romanian market – in line with the EU and international markets – is also facing other types of challenges that bring into discussion the entire design of the telecom ecosystem for the future, the experts comment, such as the tightening regulatory environment, the pressure of OTT and other ICT service providers. “Therefore, Telekom will need to adapt quickly to the challenges that lie ahead for this industry,” conclude the KPMG representatives.

With this change of identity, Telekom Romania announced it aims to offer a new customer experience, built around the one-stop-shop philosophy, which delivers simplified, integrated and customized fixed and mobile solutions.

“I think the typical Romanian household is between three and four people. Our offer is really designed with the consumer in mind, with the family in mind, to give them state-of-the art-services at good value for money. I am not saying it’s cheap but you get something that is reliable,” said Nikolai Beckers, CEO of Telekom Romania.

“We clearly have a focus to roll out the fiber network, especially in urban areas, and also to strengthen the LTE,” Beckers told BR.

This translates into integrated fixed and mobile services shops, with 43 corporate stores undergoing a complete makeover, in line with the new brand identity. Out of these, seven concept stores will offer a hi-tech, interactive customer experience, according to Deutsche Telekom standards.

“If we are talking about fixed voice, mobile voice and data, there is nothing new. If we are talking about bundles that comprise IT solutions that are accessible to a large pool of customers, then we may have surprises, especially in the IT services area, such as cloud services, virtualization and outsourcing,” comments Ciobanu. “The competitors’ reaction will be first of all to wait. And they will react, as slowly as they do now, until they feel they are losing revenue or market share.”

Prices for the all-inclusive packages range from RON 91 to RON 444, and include smartphones and tablets, depending on the offer.

“There is always room for one operator who is just centered on price in every kind of industry. The only thing that we find unacceptable is that all not operators will play according to the same rules,” Beckers told BR.

“Dolce TV has become Telekom TV. The website and mobile application will pass to the new telecom identity and will be available from October 1,” Telekom officials told BR.

“The strategy is simple: boosting profit, stopping losses, maybe laying off some staff in the next six months, and maybe a reengineering process that other companies have also gone through, with the aim of becoming more efficient. How they will do it is another matter, but I don’t believe anyone can ‘rip the market apart’ with an offer. Perhaps in prepaid we can talk about a ‘wow!’ solution, but in the case of postpaid services, it is highly unlikely,” Ciobanu told BR.

The ball is in the state’s court

The ball is clearly in the state’s court. “Our target for Romania is to have a full merger and this means not only a merger from the legal point of view but integrated operations and networks,” Nemat told Hotnews.ro.

In terms of the stake that the Romanian state owns in Romtelecom, Beckers said the government has yet to make a move on the matter, since it has not completed its evaluation of how the privatization should be conducted.

“The government should complete the evaluation and tell us what its demands are, we will come back to them, and I think eventually we will all agree that the merger is a good process. If and when – we will see how this goes. Can it be completed in 2014? I believe it is a rather ambitious deadline, but we are here and we will offer all our assistance to the Romanian authorities,” Beckers told HotNews.

In April, Alexandru-Razvan Cotovelea, minister for the information society, said the privatization of Romtelecom was among the government’s priorities.

The minister added that the Romanian state will ask for “a fair price.” “The real value is between EUR 300 million and EUR 600 million and the negotiation will be very tough, because we believe this operator has an extraordinary market potential,” he said at the time.

Cotovelea also told the media that he did not rule out the option of selling the shares to Deutsche Telekom.

“We don’t have anything against DT buying our shares. It is one of the world leaders in the field and, as long as it plans to invest seriously and doesn’t limit itself to short-term business plans, selling off would be an objective for us,” said the minister.

“By the end of the semester, we will have a very precise report from the team of consultants, and the president of the privatization committee will come up with an analysis to see what the best method from the financial and timing point of view is. It could be an IPO, a direct negotiation. I tend to believe that if the figures, the strategy of the consultants, pay off for the government, then direct negotiation is the best,” said Cotovelea at the time.

So far, even though the first semester has long ended, no information about any progress in this matter has come through the official channels.