Protests erupt in Romania after government requests Kovesi’s removal from the DNA: “We fight for justice. They fight for corruption” 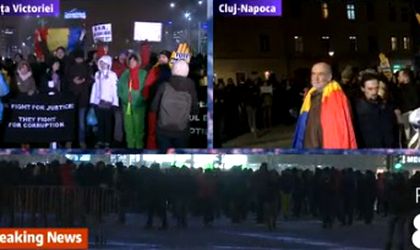 Thousands of people took to the streets of Romanian cities on Tuesday evening shortly after the minister of justice, Tudorel Toader, initiated the procedure to remove the head of the anticorruption agency DNA, Laura Codruta Kovesi.

The protesters are asking for the resignation of Toader from government and are calling for the DNA prosecutors “to come and get you all.”

”Justice, not corruption,” shouted the people.

In Bucharest, people carried a banner that read “We fight for justice. They fight for corruption.” Around 1,000 people gathered near the government building, in Victoriei Square. In Cluj-Napoca, crowds were behind a larger banner that read “United we save Romania.”

Smaller groups of protesters were recorded in Sibiu, Iasi, Timisoara, Brasov and Constanta.

Romania’s general prosecutor, Augustin Lazar, said there was no legal argument to remove Kovesi from the DNA.

The presidential administration said that president Klaus Iohannis maintains his opinion that the leadership of the DNA is doing a good job.