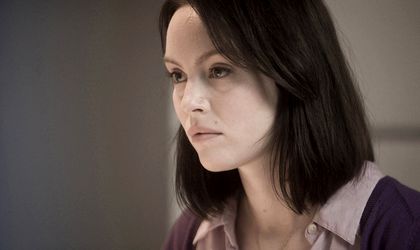 The ninth edition of Gopo Awards highlights the growing prestige of local filmmaking and will take place on March 30, at the Romanian National Theater. Romanian cinema’s New Wave has for several years now served as a cultural ambassador for the country, and the Gopo Awards honors the main Romanian local cinematic achievements of the previous year. BR talked with Olimpia Melinte about Planşa (It Takes Two to Fence), the movie for which the actress is a Gopo nominee.

How much did you train for learning to fence? It was harder the physical effort than learning Spanish in a short time for Cannibal?

The fencing training lasted one month and it was tested not only my muscles, but also my patience and my dexterity, thus being a beautiful period in which I pushed my limits and my body. Maybe it was easier to learn Spanish for Cannibal, but it’s quite difficult to make a comparison.

What it was like to work with Andrei Gheorghe?

Andrei is a free man who likes to experiment, he believes in improvisation and he really knows to respect his actors. It was easy to work with him and I really enjoyed the role I had and the fact that I have learned to fence, a very noble and passionate sport.

What do the Gopo Awards mean for you? What are the expectations that you have for this year’s edition?

Gopo Awards mean a meeting where you gather with friends in a gala suit.

About Planşa (It Takes Two to Fence)

Gheorghe Andrei’s debut independent feature Planşa (It Takes Two to Fence) has premiered in September 2014, telling the story of Alex (Silvian Valcu), a former fencing champion, who is returning to the sport as a coach. When Anda (Olimpia Melinte) signs up for classes, Alex becomes her trainer, but their professional relationship develops into something more. This comes to the attention of Mircea (Marian Adochitei), Anda’s boyfriend, who is a member of the same club. The tension mounts until Anda is forced to choose between fencing and Mircea.