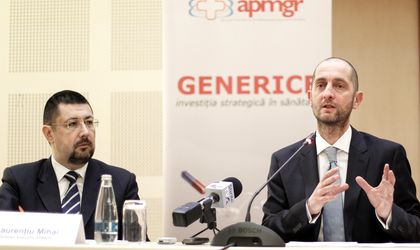 In the past year, “850 medications disappeared off the Romanian market” due to the combined effect of the clawback tax and a series of price falls, said Dragos Damian, president of the Romanian Association of Producers of Generic Drugs (APMGR) at a press conference on Wednesday, calling for the introduction of a differentiated computation for this tax.

The clawback, applied to medication producers and calculated in the same manner for both innovative and generic medication, “has reached an unacceptable level,” according to Damian.

“This has made it so that 2000 medications have disappeared from the Romanian market in the past 3-4 years,” with 850 only in the past 12 months, he further added.

Of the disappeared medication (referring here to both innovative and generic), “most are medications with low prices that patients can no longer find in pharmacies or ask to be given replacements or can’t even find those,” stated Damian, adding that what this means is that “the health system will cost more.”

One such medicine that is no longer available on the Romanian market is midazolam, used in anesthesia for intensive therapy, and particularly needed through the aftermath of the October fire in the Colectiv club.

“The price and clawback policy of Romanian authorities made it so that the producer that used to bring [midazolam] no longer did so, therefore we had to bring it for special circumstances together with the National Agency for Medication (ANMDM),” pointed out Damian. The special circumstances provision refers to bringing in those medications that don’t hold a valid authorization from ANMDM for being placed on the Romanian market but are needed for the treatment of patients in extraordinary cases.

Moreover, APMGR has warned that recently some 500 employees were let go, “and that this tendency will continue if authorities keep the same regulatory framework”. In total, the member companies of APMGR provide 8,000 jobs.