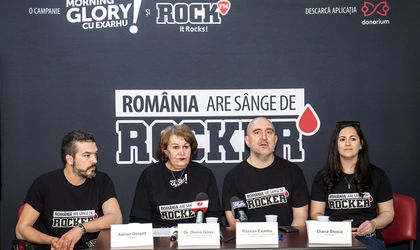 Rock FM’s “Morning glory” show has launched a campaign in order to increase the number of blood donors as Romania ranks among the EU member states with low number of donors. Only 1.7 percent of the residents are active blood donors, acording to official data.

One in 10 patients in the Romanian hospitals needs blood transfusions, but many of the operations need to be postponed due to the lack of blood.

In the first trimester of 2019, at Bucharest’s Sanguine Transfusion Center registered over 1.100 less donors than the same period of 2018, while the acute need for blood is double the one that is normally harvest.

During this tragic context, „Morning Glory cu Razvan Exarhu”, ROCK FM’s morning show, initiated, alongside Bucharest’s Center for Transfusion and Donorium, the national campaign „Romania are sange de rocker” (Romania has rocker’s blood), that proposes itself to grow the number of blood donors.

During one month, 5 of the most famous rock bands in Romania – Vita de Vie, COMA, Byron, Trooper and Nightlosers – will sing rock covers after the most famous Romanian hits.

“The people that listen to rock music have their pride, maybe even more poignant then in the case of other music genre lovers. The pride of a rocker, in the end, is that the rock sounds the best, but also that any song will sound better in a rock version. By donating blood, any rocker can change a classic song into a rock version and can transfer to any Romanian the pride of being a rocker. I believe that this is just the first solidarity, respect and empathy step. And I am convinced that, on a long term, Romania has the blood of a rocker”, said Razvan Exarhu, the creator of the „Morning Glory with Razvan Exarhu” show and the campaign’s initiator.

„Donating blood is a mentality problem that is not resolving fast and very easy. We are always talking about the blood donation. But in order not to talk anymore about the blood donation in Romania we must understand that we need donors, because, unfortunately, the blood cannot be created in a laboratory. And not only once, we need blood constantly. People donate blood when they get triggered an interior resort. We want that the passion for music and the rock culture be this emotional resort. We thank the whole rockers community in Romania for its support, said Doina Gosa, director at the Bucharest Sanguine Transfusion Center.

“We believe that all Romanians need to have an equal chance to life and to receive the blood they need. We developed the project Donorium in order to ease the donation process for the people and to facilitate the communication between the sanguine transfusion centers and the donors. With only one donation, you can save 2 lives. If you use the app and get yourself programmed for the donation you will have priority at the donation time, you will be able to be in a contest with your friends and find out who is the best at donating, you will get a reminder when you can donate again and you will be notified when the sanguine transfusion center in your area needs you,” said Diana Stoica, co-founder Donorium.

The Donorium app launched in December last year by the Smart Society Association and the Blood Willingly Donors Foundation (Fundatia Donatorilor Benevoli de Sange), in partnership with the sanguine transfusion centers. In the first 24 hours it was downloaded by 3.000 Romanians and reached the number 1 place in AppStore and Google Play.

Until now, 5 sanguine transfusion centers in the country are partners in the project, the initiators propose themselves that until 2025 to extend it to the whole country. In only 5 months, over 10.000 donors entered in the Donorium community and use the app.