McCann Bucharest – Agency of the Year at 2018 Golden Drum Festival 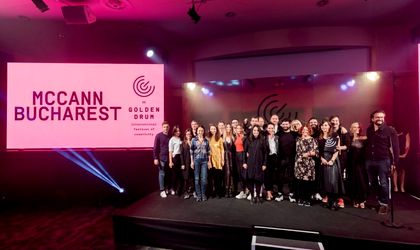 Golden Drum‘s What and Why Competition Section announced the winners of this year’s Golden Drum Festival at the Grand Award Ceremony. The best of WHAT went to McCann Bucharest for Bihor Couture in the group F. Reach, The best of WHY was awarded to DDB Spain for Finding Fariña in the group W. Innovative. Agency 180heartbeats + JvM, Warsaw, received The best of good award for Unbreakable Rainbow in the group Z. Social good. In total 26 Golden, 50 Silver Drums and 12 Grand Prix were awarded to the best works entered this year.

The agency 180heartbeats + JvM, Warsaw from Poland received the Golden Dragon award for the most successful independent agency with 43 points. Diesel, with 89 points, was awarded Brand Grand Prix.

The winners of the Young Drummers Competition are Dániel Szász and Sándor Szabó with creative solution The secret treasure of Istria. Second place belongs to Igor Pogorevici for creative work Musical Landscape, third place went to Kristina Simeonova and Maya Zlatkova for Hear Tartini in every step.