Discover the winners of BR Awards 2019! 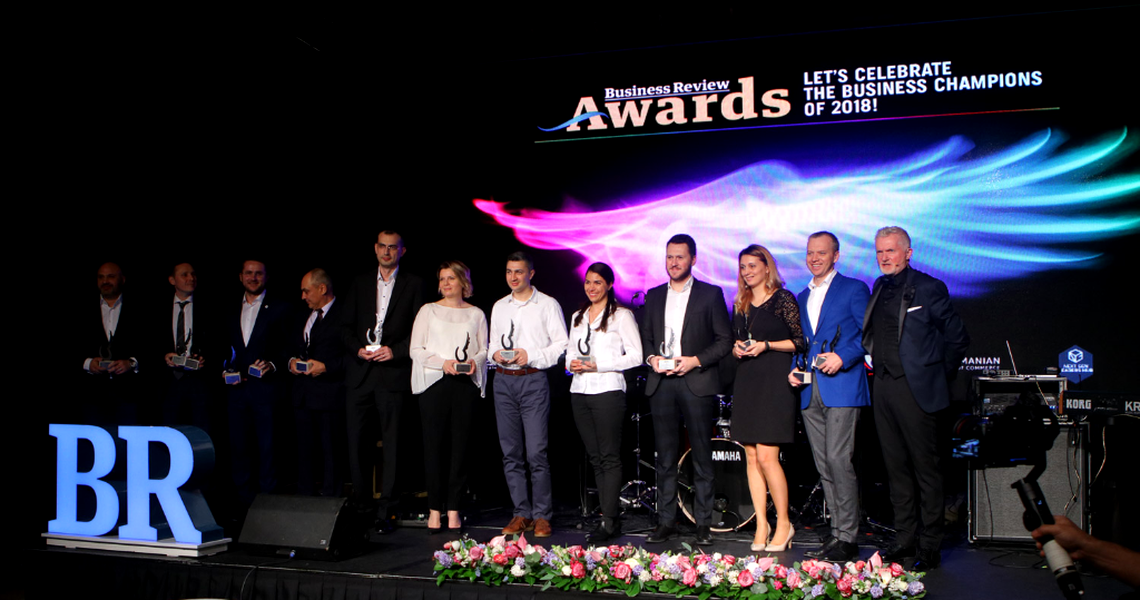 The 14th edition of Business Review Awards Gala, BR’s flagship event that recognizes outstanding achievements in the business community, took place last night at the Radisson Blu Hotel in Bucharest. There were 14 categories in which the independent jury selected the winners for their exceptional performance in 2018.

Alt Viitor is funded by Microsoft Romania with an investment of USD 1 million, launched in June 2018. It is an ongoing project, designed to run for two years, which will support the development of digital skills, with a focus on programming for 11,000 students.

Gabriela Popescu, Corporate, External and Legal Affairs Director at Microsoft, said:  “I’m very proud and honored to receive this prize in the name of the Microsoft team. It obliges us to continue our investment into Romanian education.”

Winner: Teach for Romania // Award handed out by Dragos Tuta Teach for Romania attracts, selects and recruits high-potential people based on their abilities and motivation, trains them as teachers and supports them to become agents of transformation in education, in primary and secondary schools, from vulnerable communities.

Ms. Aura Stan – Chief Program Officer, Teach for Romania, said: “The credit goes especially to the teachers involved in our project who get up every morning and go to those communities to help children that nobody else would be able to help” Instant Factoring is the first Romanian online fintech platform for factoring, launched in April 2018. It offers a fintech solution that converts into cash any incoming invoice with a pre-established value, in less than 24 hours.

Cristian Ionescu – CEO & Co-founder Instant Factoring, said: “We wake up every day at Instant Factoring with the aim to help companies thrive in a competitive marketplace. The life of an entrepreneur can be hard in Romania and we are proud to have supported around 500 companies and trust that we will continue to do so in the future.” Autonom succeeded in obtaining one of the highest engagement scores in the last 4 years on a study performed by AON. This is a result of the unique organizational culture developed through years that implies personal development, professional autonomy and democracy at the workplace.

Dan Stefan, Executive Director & Owner, said:  “Autonom is not a glamourous place. We service tens of thousands of cars every month so its always surprising and humbling to find ourselves among the best employers in Romania.”

Winner: Kaufland Romania for the first store reorganised based on a plastic-free strategy  // Award handed out by Didona Goanta (Fepra)

Valer Hancas, Communication Director & Corporate Affairs, KAUFLAND Romania, said: “Plastic is an enemy of this world and of future generations. I would like to suggest that Corporate Social Responsibility be changed into a new concept caled Resposnsible Business Companies.”

BEST STARTUP IN THE SERVICES INDUSTRY Keez is a Romanian start-up that launched its market operations in March 2018 aiming to literally transform accounting for SMEs and Self-employed persons (PFA in Romanian) into a handy tool, available 24/7, at a less than an arm length distance: on the mobile and desktop.

Daniel Mateescu, CEO at KEEZ, said: “It has been a difficult year but we’ve managed to reach this point. We combine services and technology to offer better services to SMEs, which are great but unfortunately they have a hard time in the Romanian business environment.”

BEST STARTUP IN THE MANUFACTURING INDUSTRY KHAR is a research and development incubator for water and agriculture, founded in Sibiu. It is specialized in developing and implementing water supply solutions.

Adela Luță, Product & Operations Manager at KHAR, said: “We make it our mission to provide clean, drinkable water. everywhere. Hopefully by next year we’re also going to be in the places where we are needed most.” Techcelerator is an acceleration program which aims to become a key player in supporting the CEE Startup ecosystem. It is the first accelerator in Romania which allocates funds for the development of the companies in the (pre)acceleration phase (pre-seed).

Cristina Țoncu, Program Director at Techcelerator, said: “We are honored to receive this prize and confident now more than ever that our efforts have started to be increasingly relevant to the business environment in Romania. As one of our founders recently said, Techcelerator doesn’t accelerate your business, but it makes you accelerate it yourself by providing the knowledge and resources you need.”

BEST EMERGING ENTREPRENEUR OF THE YEAR Alexandru Lapusan is the CEO of Zitec, one of the leading IT companies in Romania, whose mission is to help companies around the world innovate through digital transformation and automation. Zitec’s revenue went up 28 percent in 2017, reaching EUR 5 million. UNTOLD is a huge EDM-centric music festival in Romania and it is now one of the most famous dance music festivals in Europe. Showcasing a superstar lineup every summer, UNTOLD attracts dance fans from across the continent, drawn in by the big names and the even bigger production.

Bogdan Radulescu, Founding Member & Head of Partnerships at UNTOLD, said: “We started in 2015 and our main goal was to show that Romania was capable to organise one of the best festivals in the world. Now we are one of the youngest and most ambitious entertainment groups in Eastern Europe. We would like to thank our partners and our fans and to large companies.”

BUSINESS LEADER OF THE YEAR – Best CEO of Large Companies In 2018 FAN Courier invested over EUR 27.5 million, up by 50 percent compared with their estimations made at the end of 2017. Their largest investment in a storehouse has been completed last year: the second storehouse in Stefanesti and the selection line in their new HUB.

Neculai Mihai, Managing Partner at FAN Courier, accepted the prize on behalf of Felix Patrascanu, and said: “We never thought we’d have such a large company with about 6,000 employees across the country. We also have about 2,000 couriers with whom many of you have interacted yourselves.”

BUSINESS LEADER OF THE YEAR – Best CEO of SMEs The Stefan brothers succeeded in creating a business model which outnumbers multinational companies and above all creates a great company culture based on common values and passion for learning and development. In 2018, Autonom had a turnover of RON 205 million and 317 employees.

Dan Stefan, Executive Director & Owner at Autonom, said: ”We never thought we’d have such a large company with about 6,000 employees across the country. We also have about 2,000 couriers with whom many of you have interacted yourselves.” Cristian Ionescu – CEO & Co-founder of Instant Factoring, said: “This is overwhelming for us. Our mission is to enable the development of small and micro companies in Romania and everywhere else. We are going to enter three new markets this year, in neighbouring countries.”

DEAL OF THE YEAR The merger by Bancpost’s absorption is part of BT’s strategic objectives. Following the absorption of Bancpost, Banca Transilvania wants to consolidate its position on the financial market as a solid financial institution able to cope both with the growth and decline periods from the Romanian economy. BR Awards 2019 – Vote now for the Best Promoter of Romania through...

BR Awards 2019 | Submit your nominations for the Best Emerging Entrepreneur of...