Events you shouldn’t miss this weekend in Bucharest – September 6-8, 2019

Summer is over, but that is no reason to stop having fun, especially in this perfect weather! Read BR’s guide of events you should be checking out in Bucharest this weekend.

The biggest street food event in Europe comes with the best musical line-up this year, which you can enjoy over the course of three days. Musical guests include Asian Dub Foundation (Official) Sound System, Nouvelle Vague, Sunnery James & Ryan Marciano, Suie Paparude, The Mono Jacks, GOLAN, Subcarpati, Alternosfera, and many more – see them all here, along with the daily schedule. In terms of food, there will be all kinds of delicious treats, including burgers, fish, Asian food, desserts and drinks.

The Enescu Festival is now at its 24th edition and Bucharest’s concert halls are hosting over 2,500 of the most talented musicians from around the world, coming from 50 countries to give 84 concerts and recitals. “The world is harmony” is the tagline of this year’s event. Read BR’s detailed article on this year’s festival. 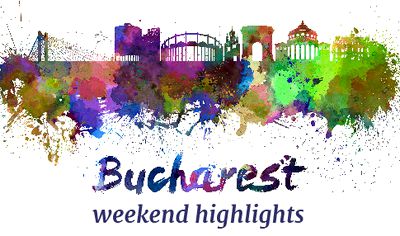 The fifth edition of BIDFF gives you the chance to explore the intersection between experimental film and contemporary dance in fascinating short films. This year’s theme is “The Network”, marking the beginning of a new development phase for the festival, both by integrating several film genres as well as by introducing a lab where creators can develop their early-stage cinematic projects. Reforma Photo Days is an event that brings together photographers, tech leaders and visionary creatives to explore the future of photography and its impact on communication, arts and society. The event is open to all photographers – beginners, amateurs or professionals – who get the chance to showcase their creativity and be discovered by the public or by institutions. See the full schedule here.

The grassroots urban festival returns with a fall edition in Gradina Icoanei Park. Organisers promise to make us feel like we’re on a city break in the middle of the city, with artists selling their latest creations (clothes, jewellery, accessories, decorations, etc.), great food, wine, ice cream, natural cosmetics, children’s books and activities that will keep you entertained for hours.